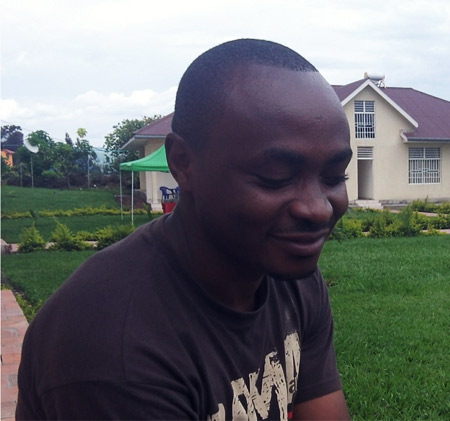 Hi my name is Hebdavi and I am a Congolese national. Congo is my home and I love my country.

Growing up in DRC hasn’t been easy though. The constant traumatisation due to repeated wars and experiencing all the evil around you leaves you with crushed hope for the future. There are around 2.6 million Internally Displaced Persons (IDPs) in the Congo and it is estimated that 80% of the population in Eastern Congo has been displaced at least once in their lifetime. I don’t doubt this because I have been displaced myself and so have all my friends. Forced migration produces long term psychological effects on the displaced; there is a feeling of uselessness, dependency on aid and an inferiority complex that is forced on you. As a young person in DRC, you therefore grow up feeling limited in what you can achieve and also feeling like a “lower” human being or less important person compared to the rest of the world.

The formal education system, which hasn’t been updated to reflect 21st century realities, doesn’t help much either. School is turned into a place for memorizing multiple old theories that are just not practical in real life.

When someone wants to challenge the government, it puts his life and the life of his family in danger. In 1999, my father, as a church leader in North Kivu province, tried to challenge the government on the prevailing injustice. Instead of justice, my whole family were forced to flee the country, fearing for our lives. We lived in exile for 4 years. Such factors leave young people with the idea that you must find how to fit into the system or else face dire consequences. As a result, generation after generation, there is no improvement in the system because very few are willing to pioneer change; the risks are just too high.

Despite this, the Congo remains a country with great potential. Its untapped mineral reserves are of strategic global importance and are estimated to be worth US$24 trillion, making the country perhaps the richest in the world. In order to merge the social-economic situation of the country with the wealth written about in books and reports, leadership is required. Positive leadership will raise the country from the situation of extreme poverty and injustice to God’s intended purpose.

This is why I joined The Congo Tree. It’s an opportunity to impact Congolese youth and make sure they know they are much more valuable than they have been led to believe. The Congo Tree is an opportunity to raise up a new generation of leaders who can progress the nation and turn things around. It provides opportunities to bring young people together and to make us think together through topics that would never be found in the formal education system. There is also the creation of networking and peer support among youth who are likeminded and can help each other grow stronger and not give up on their dreams.

The best part of it is the increased self-esteem. Young people come out of the training sessions with a determination for change and a different way of thinking. They recognize that poverty and injustice can be changed; it’s not our fate, we are not doomed to stay in this status quo. God created us for a much greater purpose and it’s time to live out that purpose.